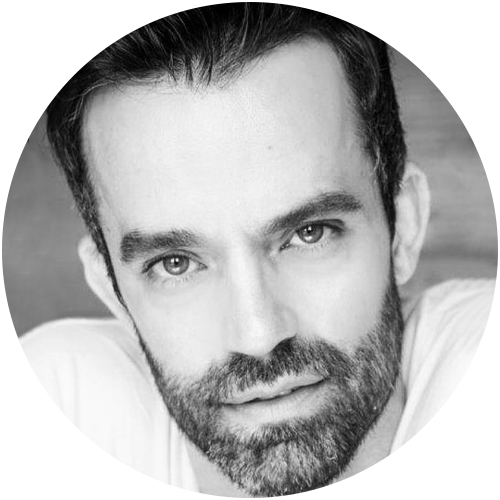 Born in the Cowichan Valley, British Columbia, Canada, Aaron Sean Watkin graduated from the National Ballet School of Canada in 1988 winning the prestigious Erik Bruhn Award, awarded to the most promising student in the school. He also attended several summer school courses at the School of American Ballet where he had the opportunity to study with Stanley Williams. Watkin is experienced in a variety of different styles of dance including Vaganova, Bournonville, Balanchine and the French and English styles.

He has had personal coaching with numerous ballet stars such as Erik Bruhn, Stanely Williams, Fernando Bujones, Gilbert Meyer, Lynn Seymour, Noella Pontois and Irina Kolpakova.
Watkin enjoyed a full career in dance beginning with leading classical companies including National Ballet of Canada, English National Ballet and Dutch National Ballet, where he worked his way up from corps de ballet to the ranks of soloist. After 7 years of the classical repertoire, he was invited by world renowned choreographer William Forsythe to become a Principal Dancer with Ballett Frankfurt. During this time he learned a completely new vocabulary of dance and had numerous opportunities to create new works with Mr Forsythe, the experience was invaluable. Watkin always admired the works of Mr Nacho Duato and in 2000 joined his company, the National Dance Company of Spain. By this point Watkin’s professional experience in dance included an excellent knowledge of diverse repertoire including the classical ballets of Petipa, Ashton and Wright and the contemporary works of Balanchine, Forsythe, Kylian, Duato and many others.

In June 2002 Watkin was appointed Associate Artistic Director to Victor Ullate Ballet in Madrid, Spain where he gained experience in many different areas of directing a company, from studio to administration. Watkin was a personal choreographic assistant to Mr William Forsythe, in charge of setting and rehearsing his ballets on dance companies throughout the world, including Kirov Ballet, Paris Opera, Dutch National Ballet among others. In 2005 he also assisted Mr David Dawson for his creation of Reverence for Kirov Ballet and Mr Johan Inger, for his creation of Negro con Flores for Cullberg Ballet. Watkin was a guest teacher to many of Europe’s leading dance companies and Artistic Associate Director of The Loft Dance Studio in Brussels, Belgium. Watkin was also Artistic Associate Director of the annual Dance For Life AIDS Benefit Galas at the Cirque Royal Theatre in Brussels, Belgium.

Aaron S. Watkin was appointed Artistic Director of the Semperoper Ballett on August 1st, 2006. In 2007 he choreographed his first full-length ballet production »The Sleeping Beauty«, followed by »La Bayadère« in 2008 and »Swan Lake« in 2009. This season 2011/12, Watkin will create a new production of The Nutcracker together with the Rector of the Palucca Hochschule für Tanz Dresden, Prof. Jason Beechey.